With Apple’s annual “iPhone conference” only two days away, the internet was bound to explode with more speculation on what the iPhone 6 will be like. However, it seems that the internet has graced us with something even better. A Chinese website has leaked an actual, functioning iPhone 6. Or at least they claim so. 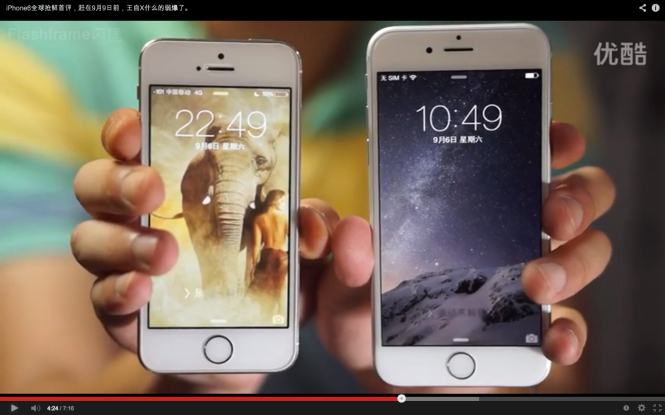 I follow iPhone news pretty closely and I have to say that this is the most legitimate leak I’ve seen so far. I do have to caveat that with a couple of red flags. One thing that Steve Hemmerstoffer, writer for NowhereElse, pointed out was the unusually long minute hand of the clock app when compared to the current clock app on the iPhone 5s. The video also shows the camera lens protruding out the back of the iPhone. This pretty much goes against Apple’s design dogma of flat, smooth surfaces and round edges. However, there were reports of the camera lens using extremely scratch-resistant sapphire glass possibly allowing it to protrude without being easily damage despite being exposed.

Aside from the items mentioned above, everything else, from the physical phone to the software, is in line with what’s been rumored to be part of the iPhone 6 experience. Most importantly, the Passbook app has an extra stripe above it portraying a credit card, which seems to support the idea that the iPhone 6 will support mobile payments (read NFC). This is a gigantic upgrade allowing users to pay at retail terminals with their iPhones, presumably using your iTunes credit card they have on file.

It’s going to be an exciting week. I personally can’t wait to see what the iPhone 6 has to offer, especially since I’m planning to upgrade from my very slow iPhone 4.  See the full video of the leak below:

Hello, hello! I haven’t written in a while and that’s mostly because I’ve been knee deep in my newest app, Pxture, which is finally available in the Apple App Store for the very inexpensive price of FREE.

While I was building the app, I encountered a possible bug. I was trying to get two UITableViews horizontally adjacent to each other in a single UIScrollView so I could essentially swipe left and right to switch table views.

However, after I return to the root view from clicking into a UITableView cell to view the detail page, the UIScrollView would cease to respond! I could, however still interact with the UITableView. It made no sense at all! It’s as if the scroll view was non-existent. I NSLogged some touch points and found that views inside the scroll view returned nothing.

After searching the internet, it seems that this is a common problem and is a possible bug in IB. I eventually unchecked “Use Autolayout” on my IB file and viola! Everything was working once again. I always had a bad feeling of this auto layout crap that Apple is trying to push on us. It’s more of a headache than it’s worth!

We all know it’s coming. Every year Apple refreshes its mobile software, “iOS,” with a big update that tend to include many “revolutionary” features. Rumor has it that iOS 7 will be announced some time in June along with the iPhone 5s and perhaps the “cheaper” iPhone. There’s been a lot of talk about iOS 7, primarily because of CEO Tim Cook’s executive shakeup last year that put Jony Ive in charge of iOS design. If you didn’t know, Jony Ive is THE hardware designer of Apple. He designed everything from the iPod to the Macbook to the iPhone.

While I’m confident that any design changes in iOS 7 will be nothing short of spectacular (see flat design), that is not the focus of my post. Instead, I’m more concerned about the practical changes in iOS 7. Last year, iOS 6 failed to provide any new useful features. Here are the top five improvements and features I’d like to see in iOS 7:

The iPhone, as a full-featured smartphone, has many connectivity features that may need to be switched on or off depending on your needs. Unfortunately, there’s no easy way to do this currently. If I want to turn on Bluetooth, I have to go into the Settings app and turn it on from there. Maybe I want my phone to use LTE instead of my school’s terrible wifi. Again, I’d have to go into settings to do that. The ability to quickly turn on/off these popular features (along with Airplane mode and Location services) would be a welcome addition. With the iPhone 5, Apple has increased the amount of screen space they can play around with. I think it is very likely that we will see toggle switches added on to the notification center in iOS 7.

I don’t know about you, but I tend to close my apps entirely even from backgrounding. I don’t understand how Apple has never made a “close all” button in the background/app switch manager. I would like to see this in iOS 7 and I think there’s a good chance we will.

You may have noticed that the iOS default calendar app shows you the actual date. However, that’s the only Apple App that does that. Why can’t they do this for other apps? Why does my “Clock” app always show 10:15 and why is the weather always 73 degrees? I understand Apple has some sort of vendetta against widgets on iOS home screen, but this would be a great way they could incorporate live information onto their current setup.

I know it is in Apple’s nature to be a control-freak when it comes to the OS environment, but I think it’s time to let us users choose what apps we want to be our defaults. No, I don’t want Safari to open up every time I click on a URL, I prefer the Google Chrome app. I would like to use Sunrise as my default calendar app, not the one provided. APPLE IF YOU’RE LISTENING, DO THIS!

To be honest, I barely use Siri, but that’s probably because it sucks. If they improved it, I would definitely use it more often. Every now and then I use Siri to text people, but I hate doing so because it can’t distinguish between two separate sentences. That’s an understandable problem, but sometimes Siri doesn’t work entirely. It often just freezes in a middle of a request with that purple beam continuously spinning itself into oblivion. Needless to say, get on this Apple.

There’s a Text Fortress going on right now! All you have to do is follow this link to the contest, like the Facebook page and gain as many as 10 chances to win. The prize is two copies of Text Fortress for you and a friend. The winner will be announced March 15th and will immediately get codes to download the app for free!

Text Fortress‘ first update (v 1.05) went live yesterday and it fixes a nasty bug where all the buttons in the app seemed to be broken. In the process of fixing this problem, I discovered an interesting difference in the way iOS 5.x and iOS 6.x handles user taps.

First, I’d like to thank Text Fortress user, Vishal Patel, for kindly notifying me of this unintended function. Thanks to him, I was able to pinpoint the problem and fix it easily. Since I primarily tested this app using iOS 6.x, I did not experience the problems Vishal did. It turns out that UITapRecognizer’s property “cancelsTouchesInView” is set to YES by default in iOS 5, but it is set to NO in iOS 6.

This turned out to be a problem in my app because I had it set up to immediately look for taps when the app launched. In iOS 6, this wasn’t a problem, but in iOS 5, it prevented the users from interacting with the UIButtons since the system kept registering it as a tap. There are two ways to fix this problem.

One way is to manually set UITapRecognizer’s “cancelsTouchesInView” to NO. Another way, which is what I opted to do, was to check for taps only when necessary. For example, I was using the tap gesture to dismiss the on-screen keyboard. Instead of looking for taps right from the get go, I simply started looking for taps when the keyboard was present (the keyboard covered the buttons anyway). So there you have it, a little food for thought for beginner iOS devs.

Text Fortress recently went live in the App Store and ever since then I’ve been brainstorming of ways to best promote the app. I’m an amateur marketer, using only Facebook and Twitter to promote my previous apps, so I really have no idea what I’m getting into. However, I do know that I want more exposure than what I achieved before, and that is why I am going to conduct an actual marketing campaign.

I plan to do both Facebook and Google Adwords advertising, but I’m going to start with the later because Facebook is more effective when I have the Facebook SDK integrated into the app (which I don’t).

As I learn more about these mediums of advertising, I plan to document my progress and share my experiences. Look out for my next post where I’ll talk about my initial experience with Google AdWords and how it can all seem so convoluted to someone who has never used it before.